As my time off from work is coming to its end, I figured I should probably at least try to do something productive. At least something more productive than crocheting a donut, which was – honestly – the peak of my last weekend. Okay, not the peak, but it was a pretty cool thing to finish. :D

Okay, so the first postcard is this: 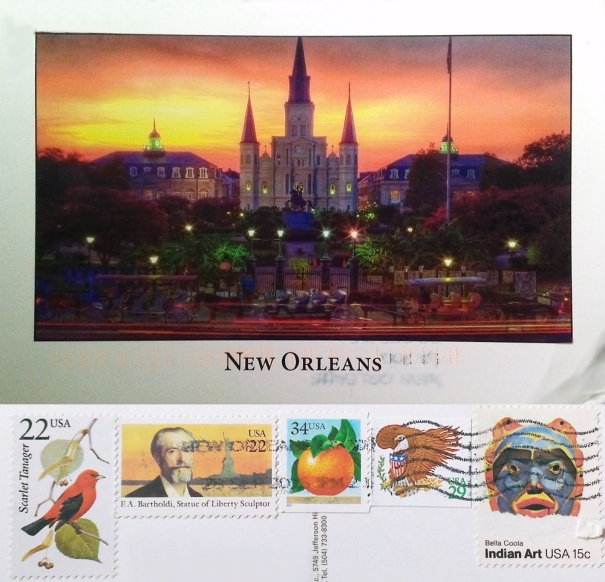 I wasn’t a 100% sure what it shows, but after a little bit of research I can say it’s the Jackson Square, a historic park in the French Quarter of New Orleans. It was declared a National Historic Landmark in 1960. In 2012 the American Planning Association designated Jackson Square as one of America’s Great Public Spaces. For more information, CLICK HERE! Awesome sunset (or maybe sunrise?) picture, btw. :)

The second postcard is this:

A lovely cup of coffee and beignets. Wasn’t quite sure what those were (click here!), except that they were OBVIOUSLY something I’d eat right away, so I went on and googled how to make one. I think I’ll stick to my leftover brownies from last night as they seem much, much easier to bake, but these beignets look like a tasty treat for sure!

Thank you, O’Neal, for beautiful postcards! I appreciate them a lot! :)

A friend of mine, Marija, visited the island of Lopud during the summer and she was kind enough to bring me this lovely postcard back.

Lopud is a small island, approximately 4.63 square kilometers (1,79 square miles) in size, located just off the off the coast in the southern Dalmatia. It is the second largest island of the Elaphiti islands, and is mostly known for its beautiful sandy beaches. One of the easiest ways to reach Lopud is by boat, it’s a short boat ride from Dubrovnik.

I’ve noticed this particular postcard in the Postcrossing gallery and immediately loved it. Of course, I added it to my favorites. And not too long after that, I found it in my mailbox! My dear pal Ugne obviously looked through my favorites and had one on hand! It made me so happy!! <3

The picture is called “It’s a Maybe” and the author is Kristina Petrošiene. I believe she’s Lithuanian?! Correct me if I’m wrong. :) But it’s such a beautiful picture! <3

Thank you Ugne, I really appreciate it! :)

I got this postcard from Finland today. It’s showing “Children Playing on the Shore” (1884), originally painted by Albert Edelfelt.  According to Postcrossing stats, it traveled 56 days to reach me!! Wow, I think that’s the longest it took for a postcard from Finland to reach Zagreb. Oh well, nevermind, it’s here. Which reminds me… I have some postcards to mail. Hope it doesn’t take this long. :)

This is the amazing postcard I got from my new postcard pal Anu! I just adore this card. If I weren’t too afraid it’s gonna get ruined, I’d put this postcard on my wall so that I can stare at it all the time.

I actually think I had this card on my Postcrossing site in “my favorites” section, so it was really cool when I found it in my mailbox. Thanks Anu! :)

I got the following three cards today. They were sent from a Postcrossing user named Cockie, who actually posted a thread on PC forum asking if people would send sort of like birthday-postcards to her friend. I said I could send one, no problem at all, cause I think it’s such a cute idea to surprise her friend. She asked me to choose some of her Japan cards (3 of them) to send me in return. Not that I’m pretending to be modest or something, but I said I don’t want anything in return, let’s consider my card to her friend be just a random RAS card. She insisted, so I picked two cards. She sent me the third one anyway. That was very very sweet of her, I think I should definitelly remember her address and send her a Croatian card just because she is so nice.

This card shows Mt. Inasayama, and it’s so beautiful. I love the combination of sunset colours and that misty look in the valley. 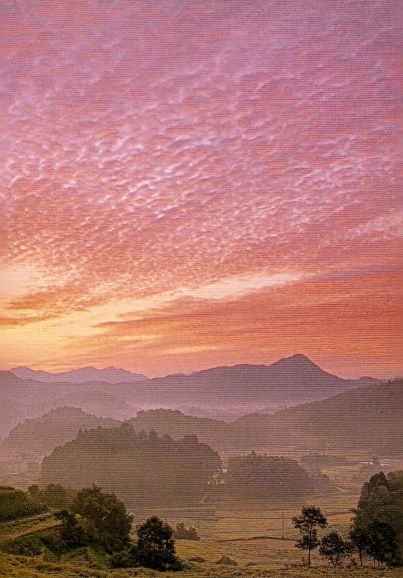 This card is showing sunset at Sinnyodo Temple. Now that I look at it, it got scanned poorly, but I think it’s obvious why I love the card.

And this card is showing Sujin Emperor mausoleum.

These cards just made me love Japanese postcards even more. :)